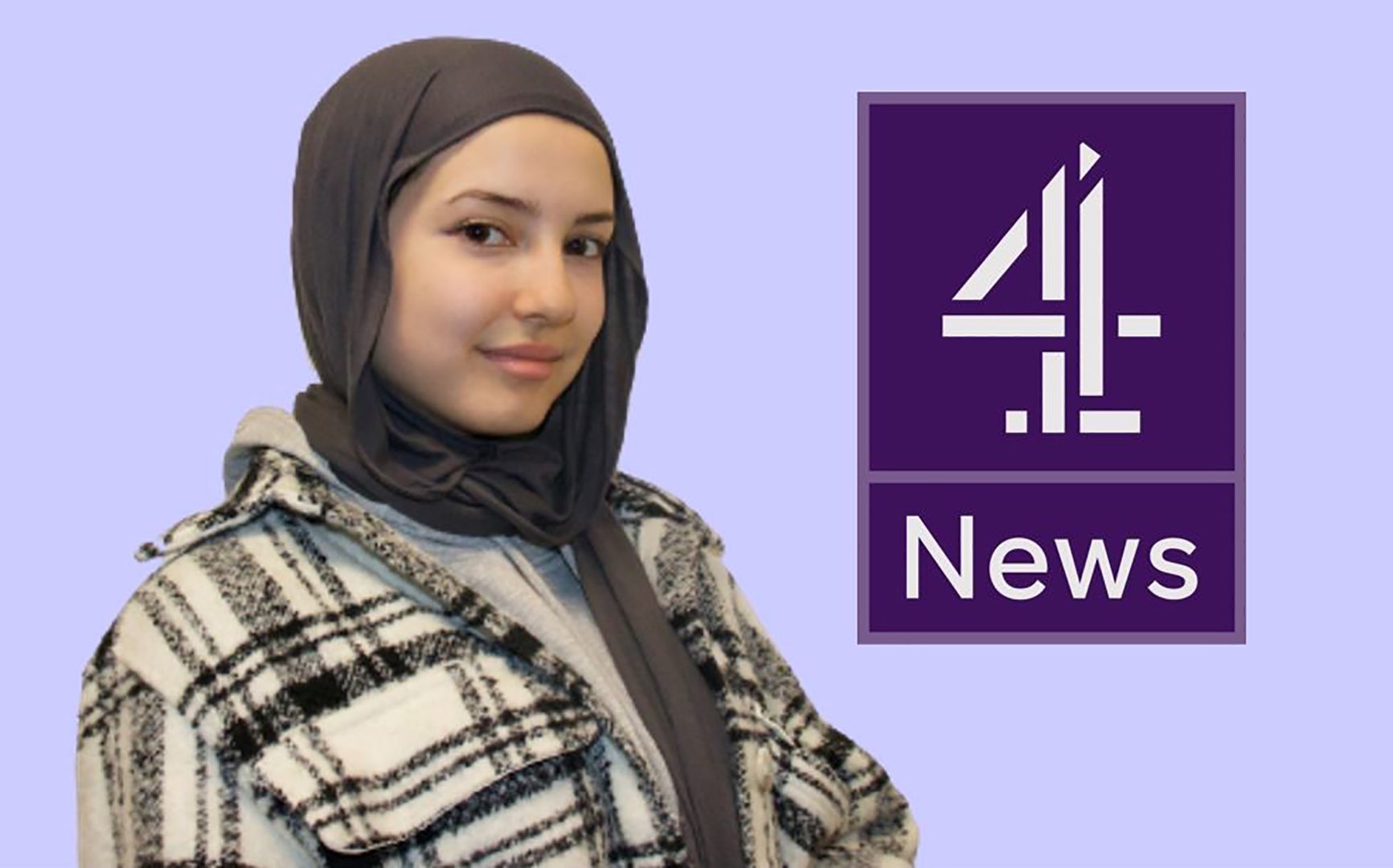 A Level Media Studies student Kubra Arslan, 17, recently secured a work placement at Channel 4 News with the support of City and Islington College’s Careers Service. Here she shares how the experience gave her a fascinating insight into working in a fast-paced national TV newsroom.

As students we are at a stage of our lives where we are making decisions about our future careers and life. Wanting to aim high or do what we love in our lives is the main goal for many of us. I’ve always been interested in working in the media, so I booked an appointment with one of CANDI’s career advisers, Elizabeth Frimpong, who had previously helped to find out more information about future careers, universities and apprenticeships.

After finding a few media-related work experiences, she was able to guide me in writing a covering letter that I would later send to the various places to show my interest in them. A few days later I received exciting news from Jordan Jarett-Bryan, a journalist for Channel 4 News at ITN Productions, asking me to call him to arrange an insight of the post-production of journalism and live news. I was quite nervous as I had never before made a call like this, but Elizabeth was on hand to give me tips. The call was a success and I secured an amazing one-day placement at Channel 4 News.

On the day I arrived I received a visitors slip so I could enter the building, which was very tall with many floors hosting different news companies including ITV News, Channel 4 News and 5 News. Jordan briefly pointed out which companies were on what floor and showed me where the actual production of live news takes place. The studio and the production control room are shared by all the news companies, which have their own scheduled time to use the rooms.

As we entered the Channel 4 News office, Jordan introduced me to some of the people that work there. I was thrilled to be able to talk to some of the team including the programme editor, news editor and graphics editor. Jordan also has his own production company and website called Blakademik, which celebrates and elevates black culture through its shows and online content.

Meeting the team had allowed me to understand the importance of each role and how without one role the news would not be able to function properly. One of the most important roles in the newsroom is the programme editor. Programme editors organise the news and create an in-depth schedule that shows the timings of each programme that are to run that day. It is crucial that programmes abide by the time given for them to run. They cannot run over their given time.

Another role at the news editorial department that I discovered was the graphics editor. Before my placement, I never thought that they would work quite so close to the news editing team. Graphics editors create visual images to anchor with the text or message that is being relayed to the audience. These are as important as visual images as they help audiences to understand the news being shown to them and keeps them interested in the news.

Later, I saw how a reporter works with an editor to bring together a report about the leadership contest for the next UK prime minster. I also had the chance to take a closer look at Channel 4’s filming studio. Seeing the studio where some of the biggest news programmes are broadcast. Something that seemed quite big was simplified to a room with only four cameras.

The final and most exciting part of the day was when I was able to watch an actual live news programme run from beginning to end in the production control room where there was the director, programme editor, production assistant, graphics editor and a sound technician. During rehearsals, and even on air, the director would frequently communicate with the news anchor to ensure everything was going to plan. It was amazing to observe and just be present in the control room.

I really enjoyed meeting with different people at Channel 4 News and getting to know more about their roles, which gave me a much better insight on a typical day working in television news.

Find out more about all our A Level courses at CANDI and apply here. 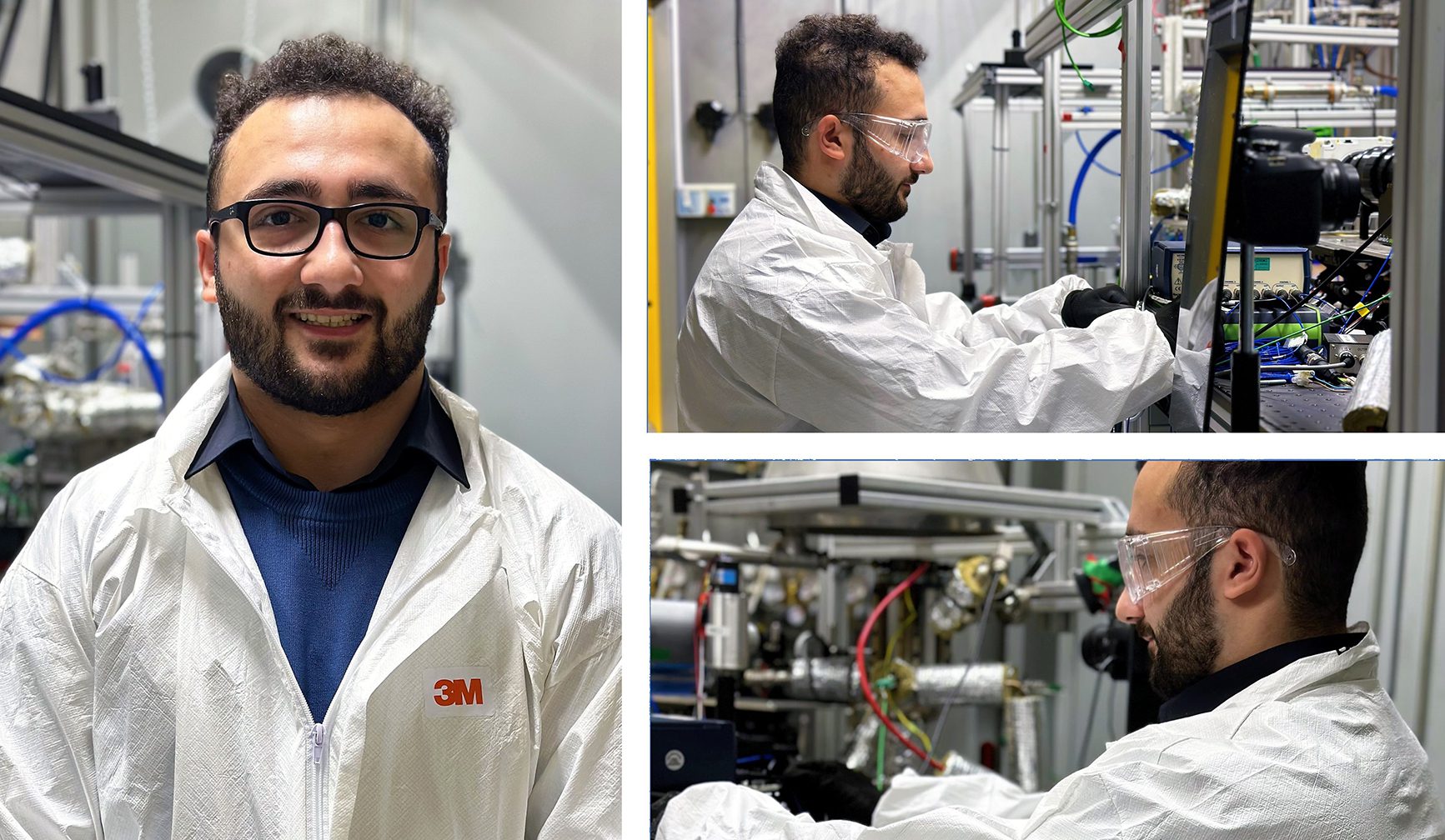 An aspiring aerospace engineer is proving a real high-flyer at university six years after he was predicted low grades in his GCSE results.

Rojhat Dere, 22, is studying a PhD Mechanical Engineering at UCL, where he is researching future hydrogen fuel technologies, having previously completed an Engineering Level 3 Diploma at City and Islington College (CANDI).

He grew up on a council estate in Hackney and was told in Year 10 that he could expect to mostly receive D and E grades after missing half the year due to ill-health.

It was quite demoralising, but it also motivated me to prove to myself and those around me that I was able to do better,” said Rojhat.

“I had a couple of teachers in my corner who helped me focus on my weaker subjects and I made a plan to get my grades up. That was the turning point.

“There was a lack of ambition where I lived. Not many people went to university or even thought about it. It seemed so out of reach.

“I was fearful of failure and regret if I didn’t do everything I could to get where I wanted to be.”

Rojhat pushed himself in his final year. He started school earlier and finished later, doing mock papers over and over. His hard work resulted in him achieving three As, four Bs and two Cs in his GCSEs.

His passion for engineering began at a young age and fixing his bike and building Lego models. He would regularly watch Top Gear and aviation documentaries on TV and his sister would take him to London City Airport to see the planes on her way to university lectures.

“I would spot planes using flight tracking apps and chart all the makes and models and see what engines they had. The technology intrigued me. I would look at the mechanics within the wing, and how all the components worked seamlessly together to get them up in the air,” he said.

Rojhat enrolled on an Engineering diploma at CANDI after meeting a lecturer with experience in aerospace engineering at his interview. He went on to pass with a triple-starred Distinction.

“The diploma a much different approach to learning. It was much more hands on, which helped me understand things better, rather than just taking A Level Maths and not understanding how it applies to the work you’re doing,” he said.

The practical side of the course involved using industry machinery and equipment in CANDI’s workshops and learning computer-aided design applications, which gave him a head start when he went on to study a MEng Aerospace Engineering at the University of Nottingham.

Rojhat was full of praise for his “inspirational” teachers at CANDI who gave students a realistic expectation of careers in engineering.

He said: “The teaching was great. Most of my lecturers were PhD engineers who knew what was required to study at a higher level and the system inside out, which was real plus in getting us into good Russell Group universities.”

During his course, CANDI arranged for Rojhat to undertake an engineering work placement with McLaren Construction Group at a new development in Hackney.

“I shadowed a civil engineer who let me use their CAD software. We also went onto the construction site to check the steel bars before the concrete was put in, and make sure everything matched the designs,” he said.

“Even though it was civil engineering, it gave me a real insight into what engineering is as whole.”

Rojhat was part of a CANDI engineering team that came first in a competition run by Transport for London (TfL) to make its services more eco-friendly and sustainable. The team was awarded two weeks work experience working in various departments within TFL.

“CANDI is where my dream became achievable. Until I went there, I didn’t think I would get into a specialist engineering university,” said Rojhat.

“I’m now on the way to a career I always hoped for. It means everything.”

Engineering employs 5.5 million people in the UK and offers a broad range of careers in mechanical, electrical, chemical, and civil engineering as well as new green technologies.

Find out more about our Engineering courses and apply here.