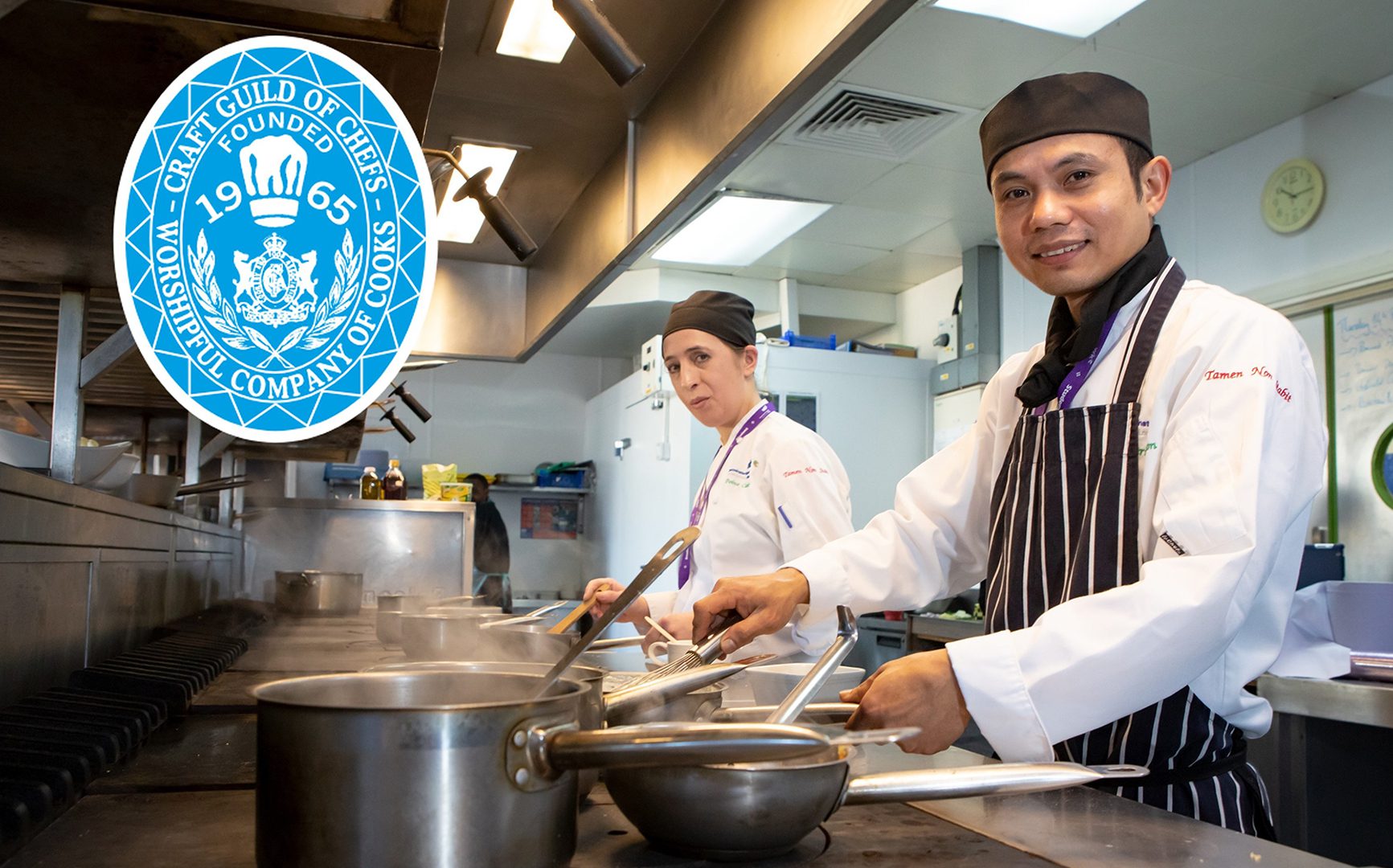 Westminster Kingsway College’s award-winning School of Hospitality and Culinary achieved another milestone when it was awarded accredited status by the Craft Guild of Chefs this month.

The Craft Guild of Chefs is the leading chef association in the UK. It plays a key role in championing the skills and talents of the people in the foodservice and hospitality sector and, as a part of this, it runs a prestigious accreditation scheme which universities and colleges that teach culinary skills can apply to join.

To be accredited, universities and colleges must meet stringent criteria set by the Craft Guild of Chefs, demonstrating that the faculty offers a high calibre of teaching. An independent assessor also inspects the college to ensure it meets the high standards required.

As Curriculum Manager Miranda Quantrill explained: “We are absolutely delighted that the college’s Hospitality and Culinary Arts provision has been accredited by the Craft Guild of Chefs. This is great news and it’s a massive endorsement of the work that we do here. A big thank you to all the staff and the students who made this possible.”

The Craft Guild’s independent assessor visited the college in early November and spoke to staff including Miranda and Restaurant Manager Marc Whitley as well as a number of our students.

He was glowing in his praise of both the quality of teaching and the attitude of the students, saying in his report: “It is clear that everyone excepts nothing but the best from each other and both staff and students understand that ethos, respect it and are more than happy to ensure the high standards requested are maintained by everyone.”

As part of his inspection, the assessor also visited the Escoffier Room, the college’s fine dining restaurant, where students cook meals for, and serve, members of the public, and was served a meal by students.

He also spoke to a couple of first year students, both of whom talked with excitement about the course and their desires to progress through the industry and what they wanted for their future. Both students spoke extremely highly of the course the tutors and the facilities they had the good fortune to be taught within.

The assessor concluded his report saying: “Westminster Kingsway College benefit from a committed and professional team of hospitality lecturers. The standards set by the faculty team is reflected in the appearance and enthusiasm shown by the students. It is clear that many students will have successful careers and the continued relationships with industry will support this objective.”

Terry Tinton, Assistant Principal Hospitality, Foundation Studies and Commercial, said: “We are over the moon that the Craft Guild of Chefs has awarded Westminster Kingsway College accredited status.

“This award has been well-earned and recognises the decades of skill and experience that has gone into the quality of our culinary teaching, as well as the way that we structure our courses to make them as industry-relevant as possible.

“It’s why students from all over the south-east of England come to us, and why so many of them graduate from here into great jobs in some of the country’s top restaurants and hotels.”

Do you want to be a chef or work in hospitality? Learn from the best at WestKing. Find out more about our Hospitality and Culinary Arts courses here and apprenticeship training here. 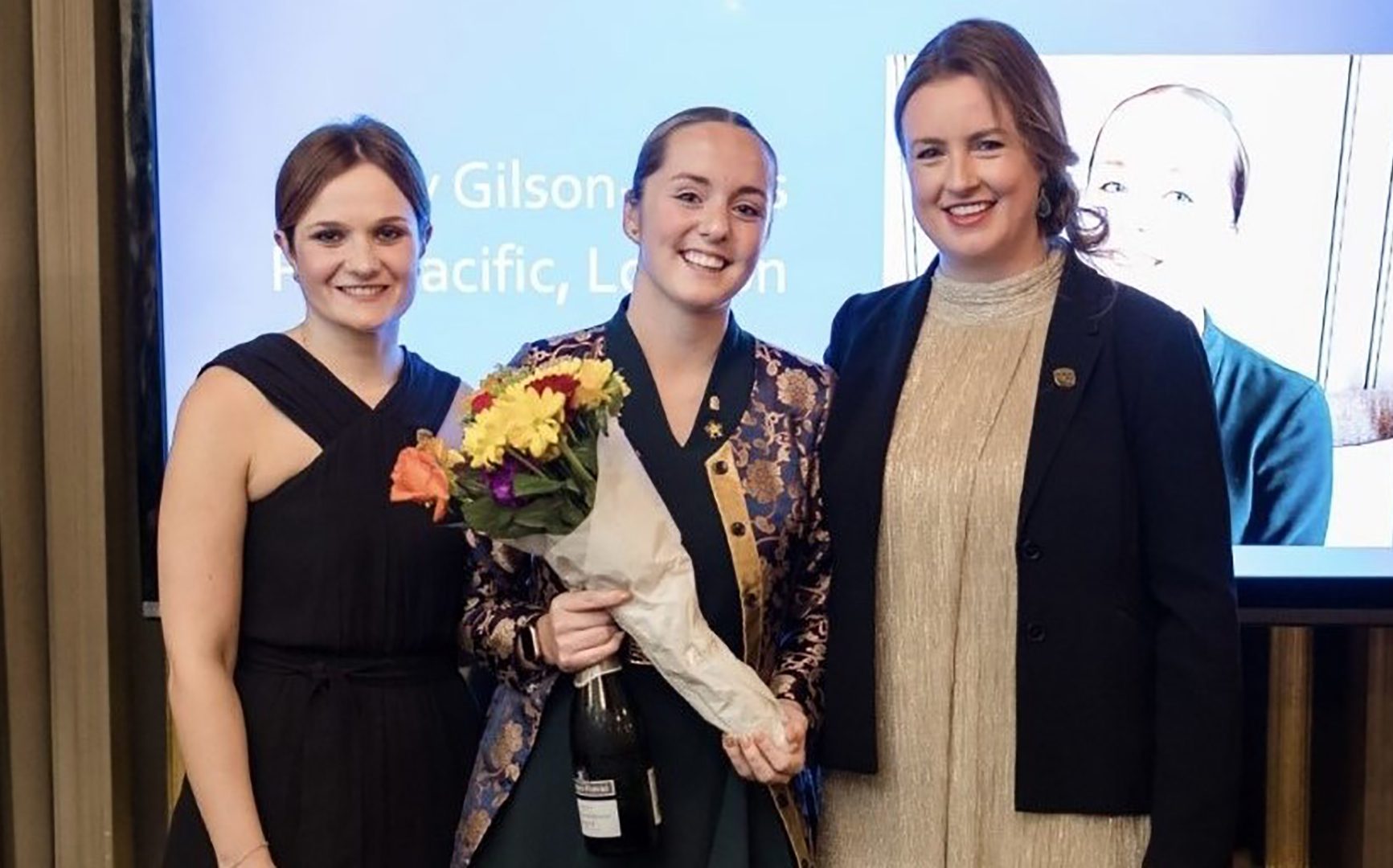 A former Westminster Kingsway College hospitality student has been named runner-up in the AICR UK Receptionist of the Year competition.

Emily Gilson-Jones, 19, who works at the five-star Pan Pacific London hotel in the City, came second out of 10 finalists at a ceremony at Hotel Café Royal in Regent Street on 14 November.

“When they announced the second runner-up as the girl from Four Seasons, I thought I haven’t got a chance, but then they announced me as the first runner-up. Suddenly, they handed me a certificate and I was in tears. I’m still gobsmacked to be honest. It has only just started to sink in.”

Emily achieved a triple-starred Distinction in her Hospitality Level 3 Diploma at WestKing in 2021 and was one of two students to share the college’s Best Hospitality Student of the Year award that year.

She began her hospitality career working part-time in front and back of house roles at the Roslin Beach Hotel in her hometown of Southend-on-Sea while she was studying at college.

After finishing her diploma, Emily worked as a Private Events Waitress for The Connaught in Mayfair before joining Pan Pacific London as a Front Desk Agent in March this year.

“I loved my time at WestKing. Even when everything went online during the pandemic, we were still doing all our classes and working as a team and all of the college tutors supported us,” she said.

“By the time it came to the graduation ceremony I couldn’t believe it was over. I wanted to stay on for another two years and do it all again.”

Emily was among a group of students at WestKing who provided catering and hospitality for a schools’ event at 10 Downing Street to mark International Women’s Day just prior to lockdown.

“I remember thinking this is quite overwhelming but really cool, I’m 16 years old and I am having the opportunity to do this,” said Emily, who along with other students met then Prime Minister Boris Johnson and other political figures on the day.

“I’m working at a five-star hotel, which wouldn’t have happened if I had just walked out of school with A Levels and then decided I wanted to work in hospitality. WestKing gave me my first real stepping stone on my hospitality journey. I wouldn’t change it.”

Emily learnt she was among the finalists in October following an interview with AICR UK committee members after she was nominated by Nicole Cechmann, Front of House Manager at Pan Pacific.

“The team I work alongside at Pan Pacific is one of the best teams I’ve ever worked in,” said Emily.

“For a business to be successful you need to work as a team, and when you get on with the team you work with, it makes it so much easier.

“It’s also nice when guests are checking in and excited about their stay, and when they leave and they tell you their experience has lived up to or gone beyond their expectations. That is probably one of the most rewarding things. It’s the reason we work in the industry.”

The AICR (Amicale Internationale des Sous Directeurs et Chefs de Réception des Grand Hôtel) was founded by the receptionists of several hotels on the Côte d’Azur in France in 1964.

AICR UK was formed when the Association of Front Office Management (UK) joined the AICR in 1989, three years after the association was established in 1986.

Liane Bhalla, Lecturer in Hospitality, Food and Beverage and Supervision, said: “We are all super proud that Emily has finished as the first runner-up in the AICR Best Receptionist UK 2022.

“At college she showed huge potential. She was always bubbly and enthusiastic, going above and beyond what was required of her in her assignment and practical sessions in the training restaurants and happy to volunteer to take part in other events. She was clearly destined for a fantastic career in hospitality.” 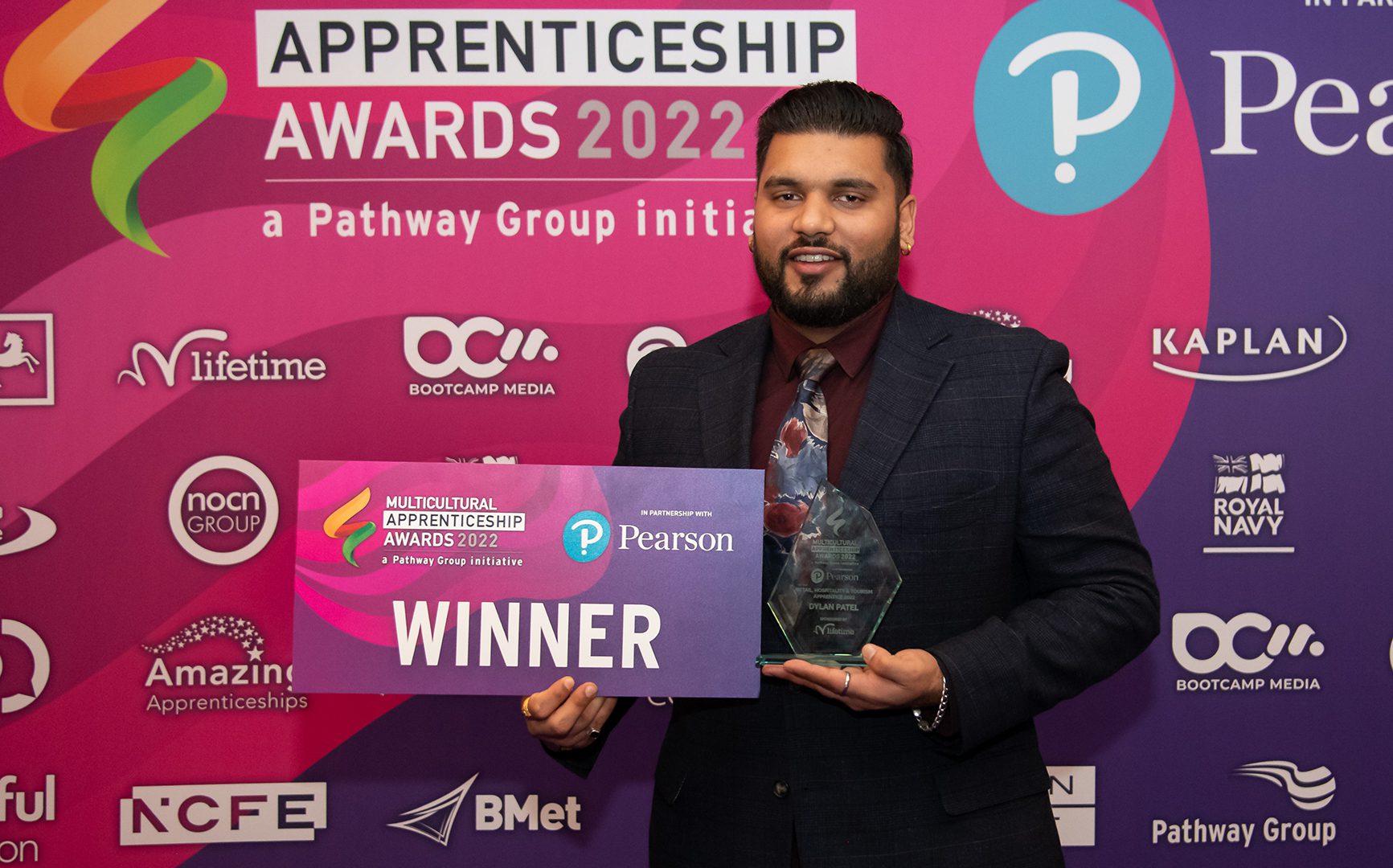 A “phenomenal” young chef from Westminster Kingsway College has been named Apprentice of the Year 2022 at Compass Group UK & Ireland’s Multicultural Apprenticeship Awards.

Dylan Patel, 25, who is undertaking a Chef de Partie Level 3 Apprenticeship at Compass Group’s head office in Chertsey, Surrey, won the award in the Retail, Hospitality and Tourism category.

The awards showcase the huge talent and hard work within multicultural communities that is made possible through the contribution and support of employers and education providers.

Dylan, from Hounslow, who started his culinary career on a Commis Chef Level 2 Apprenticeship, said: “I am so humbled and proud to being named the winner of this award.

“Taking on this apprenticeship has allowed me to follow my passion, balancing learning with practical work whilst getting paid. I love being part of the team here and learning from others around me.

“There is always something new to uncover and that’s what I enjoy most about being a chef and I hope to build my knowledge further, as I continue this exciting journey.”

He further praised Dylan’s “phenomenal efforts” as he has progressed in his career and described him as a great role model for anyone looking to start an apprenticeship.

Tom Damen, Chef Lecturer at WestKing, said: “Each week at college I see Dylan’s commitment to improving his culinary skills. Through his apprenticeship at Compass Group he has excelled to a new level of professionalism and confidence.

“I would like to congratulate him on wining Compass Group’s Apprentice of the Year, which is so well deserved. He is an outstanding young chef and destined to go far in the industry.”