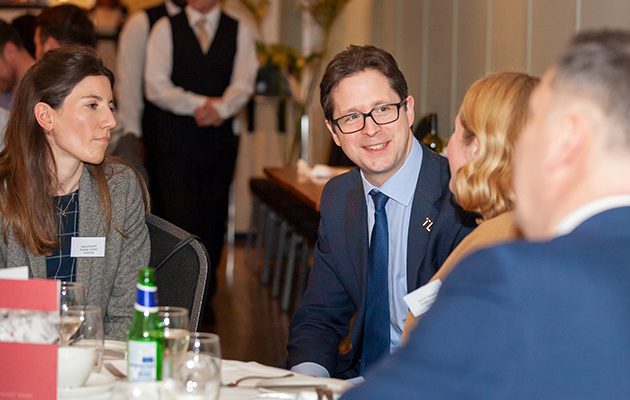 As one of the UK’s largest Further Education (FE) organisations and London’s largest FE college group, it’s important for Capital City College Group to work with politicians, and others in the education sector and in the wider economy. For example, MPs of all parties help shape public opinion and Ministers in Government make decisions that affect the funding of colleges and the lives of our staff and students – so meeting them and explaining to them the important work that we do, and asking them to consider changes to policy, is very valuable.

Over the last six months, we’ve built on the work we started last year – meeting MPs, hosting events and responding to consultations, as well as keeping up with the fast-changing post-16 education activity in Parliament. Here’s a summary of what we’ve been up to.

Back in November 2021, during Global Entrepreneurship Week, we hosted an event to celebrate the expansion of our innovative Visionnaires entrepreneurship programme. Visionnaires has already helped over 500 people start new businesses through its free programmes and earlier in 2021, we’d formed a community interest company with United Colleges Group, South Thames Colleges Group and NCG, to bring Visionnaires to eight more colleges around the country.

At the event, our guests heard from Small Business Minister Paul Scully, who said: “Visionnaires has already enabled innovative entrepreneurs to prosper through networking and support. These are initiatives that the Government strongly supports because being able to draw on the experience of others and connect with likeminded people is so invaluable whether businesses are starting up or scaling up. Projects like Visionnaires play a crucial role in complementing the support that’s given by the Government.”

2022 started on a high for us, as in January we were told by the Greater London Authority that the Group had been successful in its bids to run four new Mayor of London Academy Hubs. The Academies will fast-track Londoners into work by giving them the skills they need to drive the capital’s economic recovery from the COVID pandemic. CCCG won £1.5 million to run hubs in Digital, Hospitality, Creative, and Green industries after successful bids to the Mayor’s Academies Programme.

In February, during National Apprenticeships Week we welcomed Skills Minister Alex Burghart MP to our construction and engineering conference at our Westminster Kingsway College’s Victoria Centre. Mr Burghart mingled with employers and apprentices, before making a speech to the group where he spoke of the importance of apprenticeships to the current skills market.

Also during National Apprenticeships Week, the MP for Enfield North, Feryal Clark, visited CONEL’s Enfield Centre, where she had a tour of our facilities and met staff and apprentices on our engineering and construction provision. Feryal thoroughly enjoyed the visit and said: “Apprenticeships can make a real difference to young people’s future, and I’m delighted we have such a great provider with brilliant apprentices here in Enfield North.”

We’re doing a lot of innovative and important work with construction and engineering employers in Enfield and Feryal was very interested in how we are helping her constituents into great careers. She also asked us what she can do to help the Further Education sector in Parliament, and so we hope to continue working with her on this in the future.

February also saw the publication of the Government’s long-awaited Levelling-up White Paper. At the time, our Chief Executive Roy O’Shaughnessy commented on the White Paper’s failure to recognise London’s levelling-up needs. He said: “London is home to around 2.5 million disadvantaged people and a greater proportion of its population are poor than that of any other UK region. For example, some 67 per cent of our students are in the bottom three bands of social deprivation, but not one of the 55 new Education Investment Areas will be in the capital.”

Roy also urged the Government to acknowledge the vital role that FE colleges can play in upskilling the UK’s workforce, and called for the sector to have a sustainable and longer-term funding settlement, to enable colleges to support the Government’s levelling-up plans.

In March, during Food Waste Action Week, Jo Churchill, the Minister for Agri-Innovation and Climate Adaption, visited WestKing’s Victoria Centre, where she found out about what the college’s School of Hospitality and Culinary Arts is doing to tackle food waste. At the event – organised by the charity WRAP – our culinary students, led by Culinary Arts Lecturer Vince Kelly, treated the Minister and guests to a menu of delicious food made from some of the most commonly wasted foods in the home. The Minister was delighted with the food and enjoyed talking with our students about their experiences at WestKing.

We have also been busy keeping up with the changes to post-16 qualifications in parliament.

In January we briefed our local MPs on the Skills and Post-16 Education Bill, along with other MPs with an interest in education. In the briefing we highlighted important areas of interest for the CCCG and what MPs can do to help. Once parliamentary ping-pong concluded (where the Bill was passed between the House of Commons and the House of Lords until all amendments were agreed to) the Bill received Royal Assent and became the Skills and Post-16 Education Act on the 28April 2022.

The last six months have also seen significant Government proposals to change the post-16 qualification landscape, so we have responded to the House of Commons Education Committee inquiries into the future of post-16 education and careers information, advice and guidance; as well as a Department for Education (DfE) consultation on review of level 2 and below qualifications.

Our colleges also run a number of access and degree-level courses, and so we responded to several consultations on proposed changes to Higher Education, including changes to student loans through the Lifelong Loan Entitlement and the Higher education policy statement and reform, and Office for Students (OfS) consultations on a new approach to regulating student outcomes and the Teaching Excellence Framework (TEF).

The work of analysing these consultations (which often run to over 100 pages each) and then writing our response, is complicated and time-consuming, but it’s important that our voice – and the voices of our students – are heard by those in power.

We are working with our staff and students on our response to the Government’s consultation on the SEND (special educational needs and disabilities) Green Paper, right support, right place, right time. Some 3,239 students (or 10.8% of our students) have some form of learning difficulty – including 595 who have an Educational Health and Care Plan (EHCP), meaning that they must have additional support to meet their educational, health and social needs and the proposals in the SEND Green Paper (to change both the SEND and alternative provision systems) will affect them directly.

Throughout the rest of the year, we will continue to engage with our local MPs and other important political figures and keep up to date with parliamentary activity.